This project resulted from research into an environmental and social crisis specific to South East LA, where thousands of families are facing a severe case of lead contamination in land affected by a company recycling car batteries. As part of the research, soil samples were collected and encapsulated in oval shape ceramic pieces. This artwork responded to the bioremediating action that some plants perform in their vacuoles, where they absorb the lead and encapsulate it in these cellular organelles. The work is presented as an interactive installation, and the “vacuoles” represent the 29 most contaminated parks, schools or childcare centers in South East LA.

The viewers are able to walk around these vacuoles and to think about themselves as “bioremediating organisms”. Their image is projected on the wall as they move around the space, resembling a Petri dish or a microscopic view. This is an invitation to exercise our possibility to act as remediators, instead of exploiters. 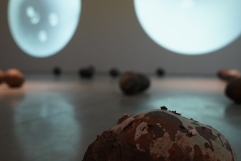 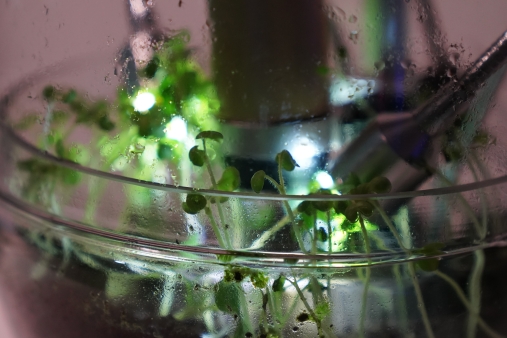 Vacuoles is a project that results from the research done to the Exide case occurred recently in South East Los Angeles. This problem is an example of complexity and causality, where the interactions of the participants show how our culture of unsustainability based on individualism, consumerism and infinite resources idea is affecting ecosystems, starting with the most vulnerable.

There are several artists that have tried to produce work that not only talks about environmental implications, but that actually helps to solve the problem. In my case, I wanted to research ways to remediate this specific contaminated area. Through Bioremediation, plants and microorganisms are able to reduce the availability of contaminants in the air and soil. Specifically for lead, there are two studied plants that help stabilize lead, avoiding it to keep floating or to be introduced in the food chain. This is the case of the mustard plant[1] and the sunflower.

I found interesting how these plants are able to work in symbiosis with other organisms on the soil, absorbing and keeping the contaminant in their roots. The way they are able to deal with it is through storing the lead in some cellular organelles called “vacuoles”. For me, this act of encapsulation was very interesting and made me want to respond to it.

For that purpose, I went to Exide and parks that are around the contaminated area to take samples of the soil. And thinking on the idea that we shouldn’t be extracting lead, and that it is needed to bring it back to the ground, I decided to mimic the activity of the plants and encapsulate myself the contaminated soil in ceramic pieces that I called ‘vacuoles’.

This can be thought just as a gesture, but I want to call this an act of remediation through an unconventional method. I’m putting back and isolating.[2] The soil is being removed, and the contaminant is no longer exposed to the environment. It is a very inefficient method but probably is comparable to what the government is doing in taking the soil and dumping everything to the landfill.

During the process of working with this project, it was interesting to see the implications of labeling the matter that I was using as “contaminated soil”, “lead contamination”. The avoidance and the sense of fear that are involved are interesting to note. While a lot of people were scared to even be around me and my work, asking all the time if it was safe, there was a place where none care about this particular contaminant: the ceramics lab.

The decision of using ceramics and specifically clay as the medium for this remediation was related to the idea of bringing the contaminant to the ground. Ceramics has its own history on the use of lead, and it was interesting to note that while I was attempting to encapsulate lead, this was also available in glazes in the lab. I decided to not use any glazing available in the lab that could have lead for obvious reasons.

[1] The mustard plant is also considered an invasive species, and it has a cultural reference as a representation of colonization by the Spaniards.  It’s interesting to see how this simple plant has these different connotations as a weed, invasive, colonizer, but at the same time, remediator, resilient.

[2] Actually this is another method on which remediation can be done: through covering the area with rocks and cement. This is not recommended because diminishes the biodiversity and unfortunately is the basis in which a landfill is conceived and other toxic wastelands are built.

The government forced Exide to pay for the repair of damages, but the costs of cleaning are surpassing the amount charged, and the process is slow. This is a clear example of environmental injustice, where the most vulnerable communities are facing a serious ecological burden, and where investigations show that this plant had violated environmental regulations for more than 30 years as state regulators turned a blind eye The government has started a very slow cleaning process, which consists in taking the soil from each property and deposit in the landfill while replacing with new soil.

Lead is a heavy metal known for its high density. It has been used by humans from ancient times. Its characteristic gray color and soft appearance were known by the Romans, who used it for plumbing installations (the reason for its chemical symbol Pb – plumbum). [2]

The US Environmental Protection Agency (EPA) reports that more than 40 million tons of toxic waste are produced each year in the United States. Of the hazardous wastes found on the ATSDR list, lead is number 2.[3] Lead dispersion through the environment comes primarily from anthropogenic activities occurring in soil, ground, and air. It has been used in paints (for 50 years), bullets, fuel additive (for 70 years) and in the lead-acid battery industry (car batteries).

Lead used in paints and as fuel additive was banned when the US Environmental Protection Agency found it dangerous for its exposure to humans, in particular, children, since it acts as a neurotoxin, affecting the nervous system. Children are more susceptible to its effects because they can absorb four times more than adults. “Its poisoning causes problems in children such as impaired development, reduced intelligence, loss of short-term memory, learning disabilities and coordination problems; causes renal failure; increased risk for development of cardiovascular disease”.[4] In the California upper limit for lead in soil is 80 ppm. [5]

The increased use of cars promoted by the oil and car industries has had a direct impact on the need for extraction and recycling of lead for the production of lead batteries. This means that human transportation is causing lead to be moved in this unsustainable system. Animals also are affected by lead. A recent study discovered that lead exposure may be common among wildlife living in urban areas and that this exposure is associated with increased aggression, particularly in birds. [6] The same behavioral changes are seen in humans, existing a correlation between lead exposure and violence in contaminated cities. [7]

A personal source of concern is that these problems in recycling plants in the US are increasingly sending used batteries to Mexico for recycling. Avoiding the damage on the US territory, through affecting other regions is a clear example of environmental injustice. This goes in hand with the consumerist system that disconnects sources, products and final disposition of residues with the idea of “out of sight out of mind”. [8]

[2] Actually, there exists a theory that the Roman Empire could possible collapsed because of the high levels of lead in the population.

[6] Stephanie McClelland, “Sub-Lethal Exposure to Lead Is Associated with Heightened Aggression in an Urban Songbird,” Science of The Total Environment 654 (2019): 593–603.